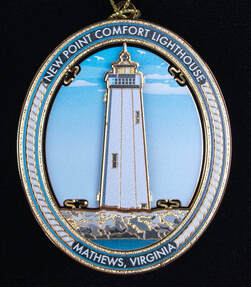 ​The New Point Comfort Lighthouse, located at the southern tip of Mathews County, Virginia, where the Chesapeake and Mobjack Bays converge, was first illuminated in 1805. It is the third oldest surviving lighthouse on the Chesapeake Bay and the tenth oldest in the nation. It was added to the National Register of Historic Places and Virginia Landmarks Register in 1972 and acquired by Mathews County in 1976. Its survival, despite the ravages of wind, water and human intervention, attests to the strength of its original construction and the dedication and determination of its numerous advocates.

In 1801 Congress called for a lighthouse at New Point Comfort. Local stonemason Elzy Burroughs was awarded the contract. President Thomas Jefferson appointed him its first keeper, a position he held for a decade. The keeper’s dwelling was completed in 1806.
This stately 63-foot whitewashed sandstone tower has had at least 20 keepers, including one African-American. In 1919, the lighthouse keeper’s position was eliminated and its oil lamps were replaced with an acetylene gas fixture. The keeper’s house also was razed. The U.S. Coast Guard deactivated the lighthouse in 1963. In 1999 its lamp was re-lit, using solar power, through the efforts of the local Lighthouse Lantern Committee.

New Point Comfort lighthouse has withstood the relentless forces of nature for more than two centuries. Over time, erosion claimed much of the narrow peninsula on which the lighthouse stood. Finally, in 1933, two mighty hurricanes cut through the peninsula, leaving the lighthouse on an island.

In 2001, the Mathews County Historical Society formed the New Point Comfort Lighthouse Preservation Task Force to preserve and protect the lighthouse and to make it accessible to the public. The Task Force became a county committee in 2005 in order to seek grants and organize planning for stabilizing the island and restoring the lighthouse. This two-decades-long project was completed the summer of 2021. 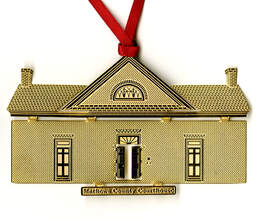 Mathews County Historic Courthouse
$20
​
The courthouse is situated on the northeast corner of Courthouse Square facing east toward Court Street. It is a 1½-story, 3-bay by 4-bay T-plan, Flemish bond courthouse with a central pediment with a gable roofline, and dates to the 1830s. This timeframe is indicated by the presence of mature, machine-cut nails and an article appearing in the 1835 Martin's Gazetteer in which Joseph Martin describes the Mathews County seat as having mail service, around 30 homes, four mercantile establishments, a tan yard, three shops for making boots and shoes, a tailor, two blacksmiths, a saddler, a carriage maker and a tavern. The public buildings -- a new courthouse, two jails and a clerk's office -- are made of brick. The courthouse has survived two large fires, in 1921 and 1941, and a hurricane in 1933 during which water rose four feet in Mathews Court House. 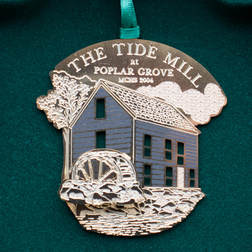 The tide mill at Poplar Grove has existed since colonial times; however, the present structure replaced the original mill which was burned during the Civil War. At one time these structures were common throughout the Chesapeake Bay region. The mill is the only one remaining in Virginia and continued in operation until 1912. 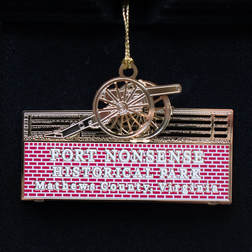 The military earthworks known as Fort Nonsense was built in 1861-1862 under the order of Maj. Gen. John B. Magruder and supervision of engineer Lt. William Henry Clark, CSA, using black enslaved labor to prevent Union forces from advancing westward from the Chesapeake Bay toward Richmond. Lt. Clark boarded at the home of the owner of the land and mill, William R. Smart. A letter written by Clark is datelined Ft. Roy, Smart’s Mill on 5 February 1862. 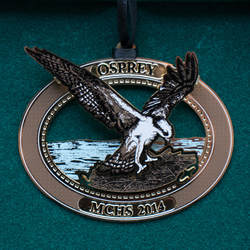 Gracing the skies over Mathews County is the majestic osprey, returning every March to our rivers and bay shorelines from as far away as Argentina. 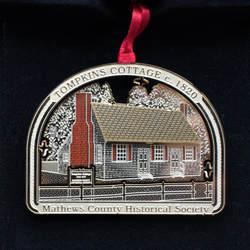 Museum and headquarters of the Mathews County Historical Society, this quaint little building is believed to be one of the oldest frame structures in the Courthouse area. The earliest known owner of this c. 1816 building was Christopher Tompkins, a prominent local planter, merchant, sea captain and ship owner/builder. The Cottage was used in his mercantile business for the sale of dry goods, hardware and groceries. Tompkins was also the father of Confederate Captain Sally Tompkins, the first woman to be commissioned as an officer in an American military organization.
Ornaments may be purchased at the Mathews County Visitor and Information Center or send your order to:

For mailing service include postage of $5.00 for each ornament and make check to MCHS.